When it comes to automating deployments on the Cloud, both AWS CloudFormation and Terraform are excellent tools that each come with their own set of advantages.

CloudFormation, being AWS’s proprietary tool, is a natural go-to for AWS users looking to rapidly deploy and automate their infrastructure on the Cloud. AWS’s preconfigured CloudFormation stacks provide users with the ability to quickly and easily deploy their AWS infrastructure with the click of a button.

However Terraform – an open-source infrastructure as code software tool created by HashiCorp – is an equally desirable tool for companies requiring infrastructure automation. Terraform’s open-source nature along with its wide user pool and complete ecosystem of products make it a very appealing tool for companies that prioritize a certain measure of flexibility and control over their cloud deployments.

“Many of TrackIt’s clients have standardized on Terraform for its broad coverage of services and it’s broad open-source user community. TrackIt has extensive experience with both it and CloudFormation and often will make a recommendation of one or the other.” – Brad Winett, President, TrackIt

Preliminary Step: Cleaning Up the Folder & Splitting the CloudFormation Stacks

The first step of the process was to clean up the deployment folder in the Media2Cloud repository. We moved all the yaml files related to the CloudFormation stack into a separate folder in order to follow Terraform best practices and to make it easier to maintain. 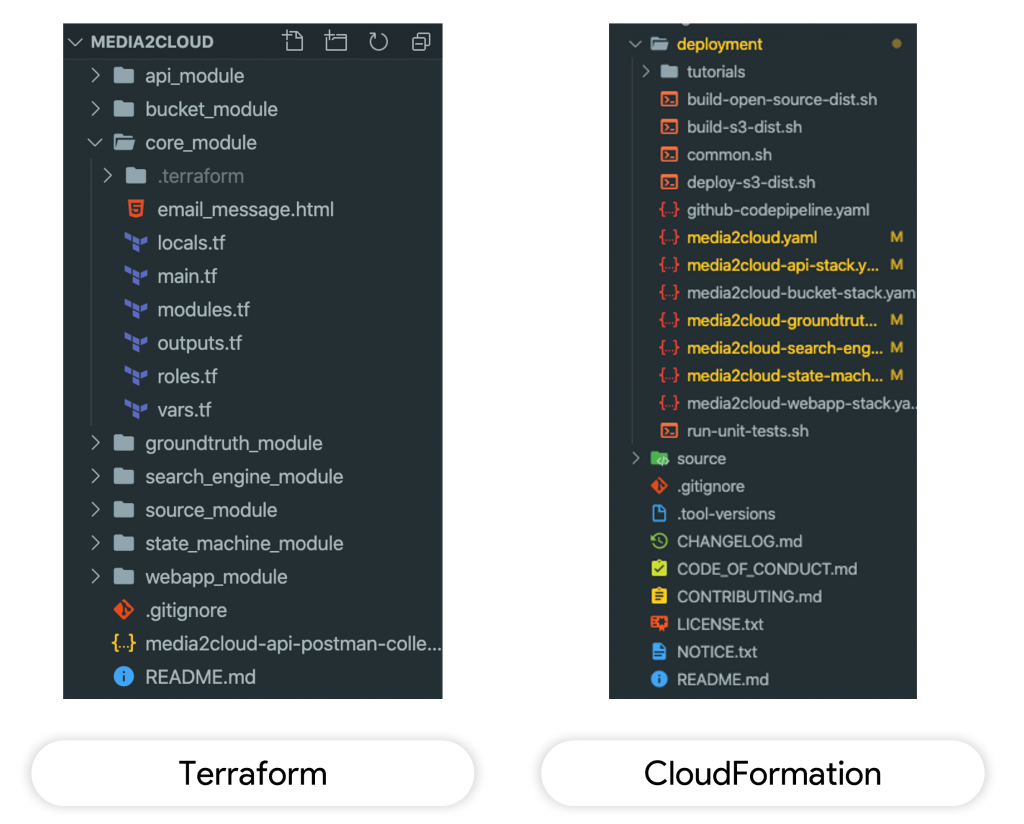 The next step of the process was to split each of the CloudFormation stacks into separate files which would then be converted to Terraform modules.

One of the primary challenges during the translation was to find an equivalent for AWS CloudFormation Custom Resources within Terraform. To address this issue, it was necessary for us to properly understand what Custom Resources do; to summarize, they are used to call Lambda functions at specific provisioning times.

A Custom Resource can be configured in the following manner in Terraform:

Calling the Lambda function at destroy

In CloudFormation, stacks have specific status codes (“states”) that describe their life cycles. The following are examples of states that CloudFormation returns:

In Terraform we don’t have access to these “states” because Terraform directly uses the AWS API and has its own life cycle mechanism. This presents a challenge since various lambda’s source code use these “states” to perform some processes. For instance, there is a lambda function that is triggered in CloudFormation only during the ‘destroy’ state to detach a specific policy from a resource. This proved to be a slight challenge while we were implementing the same Lambda function in Terraform. In Terraform we execute the command “terraform apply” for the first deployment and for any updates done after that. We realized that the prior lambda function was being triggered each time the command “terraform apply” was executed, and we wanted this function to be triggered only when the command “terraform destroy” is executed.

In order to address this issue, we added the “RequestType” attribute to the payload that is sent to our lambda function.

Here is a good example of the usage of “null_resource” resource to trigger the correct lambda function related to the “custom_resource” based on the deployment “state”:

The following were the only variables that we kept for source building:

We used these variables in the following way:

After this refactoring, we created a “null_resource” resource to build the sources and archive them:

Once the archives were built, we output the path:

And we use the outputs from the archiving modules in the other modules that need them:

During the translation phase, we experienced some difficulties with the CloudFormation stack because of its use of custom resources. In order to address these issues, we had to develop a number of workarounds and refactor some lambda functions.

For example, the custom_resource_function handles:

We used Terraform’s “null_resources” to execute script files to build and archive sources, provision lambda functions, and for the web application (see an example below).

For all the resources that were previously created by the ‘Custom Resources’ resource within CloudFormation, we created equivalents within Terraform. For example, for the user pool domain of AWS Cognito (which is normally created within the AWS API while using CloudFormation) we used the AWS Cognito Domain resource on Terraform.

We also discovered an internal bug in the AWS platform that leaves phantom resources. This makes CloudFormation stacks or Terraform modules impossible to redeploy inside the region where the phantom resource has been created. AWS is currently working on a fix.