What features does TrackIt have that help with cost savings?

TrackIt is an interactive cloud management tool that allows users to get insight to their cloud deployment’s financial and operational metrics. Although TrackIt has an extensive list of features, this article will focus on the features designed to help users decrease their monthly AWS bill. The first feature users will see when logging into the TrackIt console is the cost breakdown by resource of their monthly cloud bill for their selected cloud key(s).

This chart allows users to see exactly where their monthly costs are being allocated within their cloud deployment. Users are able to view their resource cost history for up to 12 months and follow their monthly spending in real time.

Once users know how much they are spending on each cloud resource, they can check operational and financial metrics on the My Resources tab to ensure they are maximizing their ROI. The My Resources tab features a comprehensive list of every deployed instance, including those that are running and stopped to offer users a complete look into their cloud deployment(s). 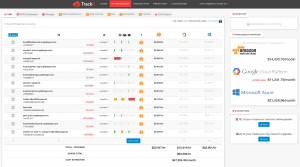 Users are able to see the total utilization of each resource compared to its capacity. Insights such as CPU, Bandwidth, and I/O usage allows users to discover if a resource is being underutilized, causing them to overspend on unused resources.

If a user is unsure of what actions to take after discovering their resources are not being fully utilized, they can review suggestions provided by TrackIt’s AI. Suggestions range from rightsizing an instance to match its utilization pattern, switch cloud providers to cut costs if resources are cheaper on a different provider than the current one, and completely shutting down an instance if it has been unused for over 15 days. 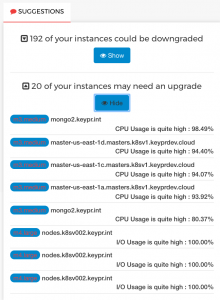 A technology company in the hospitality industry noticed a trend in their recent monthly AWS bills: every month, their bill was gradually increasing but they hadn’t experienced any drastic changes in their cloud deployment. The company’s CFO became increasingly alarmed when their AWS bill grew from $28,000 to $35,000, a whopping 25% cost increase, within the course of one month! The company’s CFO attempted to gather data on the computing instances running on AWS, the regions where their data is hosted, and the total number of accounts the company has on AWS. Even after examining all the data, the company’s CFO was still unable to pinpoint the root cause of the pricing increase on their AWS bill.

CFO turned to TrackIt to help with cost

The biggest struggle that the company’s CFO faced was that he isn’t particularly technical, and had a difficult time navigating through the AWS console. This made it impossible for him to solely search for the operational metrics correlating with the increase in cost in the AWS console. The company’s CFO searched for alternate ways to retrieve the information he needed, which is when he turned to TrackIt. The team at TrackIt strives to provide an exceptional experience to all cloud users, regardless of their technical understanding. After learning about the intuitive design of TrackIt’s user interface, the CFO knew his level of technicality would be enough for him to have a beneficial experience with the product. The CFO began to once again investigate the company’s spending pattern with the help of TrackIt.

The AWS Cost Breakdown chart featured in TrackIt’s home page revealed what the CFO was in search of. By viewing the AWS resources billing history of the past 12 months, the CFO discovered a spike in costs between June and July. The cause of the spike was the CloudWatch product being deployed, costing the team a total of $7,000 for one month’s deployment usage. Now that the CFO discovered the root of the cost increase, it was time for him to investigate the Cloudwatch product further.

The company’s CFO then asked his engineering team about their CloudWatch service utilization to determine why there was a sudden spike in costs that they hadn’t previously experienced. The company’s CFO discovered that the issue with the CloudWatch deployment was that nobody on the team was actually utilizing the Cloudwatch product, hence the team was blindly paying $7,000 for a service they neither needed nor used.

But if none of the engineers claimed to be using the CloudWatch product, who was making calls to CloudWatch and why were these calls being made? Looking deeply in the CloudWatch metrics, the engineers were able to see the call being made was GetMetricStatistics, but didn’t have any other details. The company’s CFO had to contact AWS Support for answers; he simply asked which IAM were being used in the context of GetMetricStatistics API Calls to CloudWatch. The company CFO then learned that the company’s AWS account was being charged $0.01 per 1,000 GetMetricStatistics, ListMetrics, PutMetricData, GetDashboard, ListDashboard, PutDashboard and deleteDashboard; and the high billing was related to the high number of API Requests specifically 755,278,049 requests costing about $7,552.78. The likely cause of the high requests were due to a third party monitoring software that queries Cloudwatch, specifically New Relic. New Relic, like other third party monitoring tools, integrates with Cloudwatch in a way where they keep making large amount of Cloudwatch API Calls causing heavy billing to AWS customers who integrate the monitoring service with Cloudwatch.

The company CFO asked his engineering team to disable the NewRelic key in their AWS account to stop the API calls. As soon as the key was disabled, the company saw a decrease in their daily cloud bill (shown in TrackIt’s AWS Cost Resource chart). By using TrackIt to dig into the financial and operational metrics of the company’s AWS deployment, the CFO detected wasted resources on their deployment. By acting on TrackIt’s suggestion to cut the CloudWatch service from their deployment, the company’s CFO ultimately saved the company 25% on their monthly AWS bill without affecting the performance of their current cloud deployment. 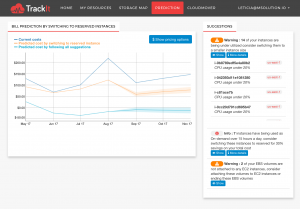 The company CFO continues to use TrackIt to monitor the company’s monthly cloud spend and to prevent another incident similar to the NewRelic issue from happening again. The dashboard proves to be user-friendly and easy for even the most non-technical user to understand.